Unaweep Wall lies on the west end of Unaweep Canyon just outside Grand Junction, Colorado. It is a granite and metamorphic gneiss over looked and under used rock climbing mecca. Most of the noteworthy and established climbing is at the east end of the canyon on smaller features from sandstone boulders to 600 ft granite walls. Traditional routes are the main attraction, but more and more mixed and sport routes are being established by myself, Jesse Zacher and others. 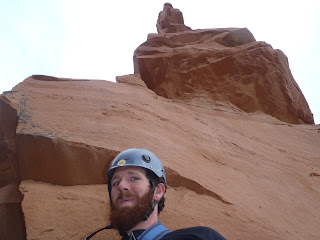 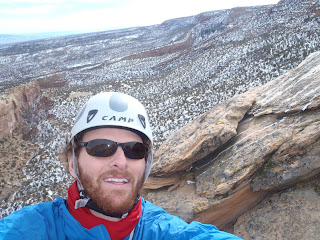 UNAWEEP CANYON
At 1300 ft tall, Unaweep Wall is imposing and impressive. Only broken by a ledge 200-300ft up, its cracks have only been attempted by a few adventurous folks and officially completed by one. This Saturday, Jesse Zacher and I will attempt a ground up new line on the wall. Currently there is only 1 existing aide line on Unaweep Wall. We have only scoped the wall with a spotting scope and will hope that our journey brings us to the summit in good fashion. Our goal is to free climb the entire wall without having to resort to any aide climbing moves. Stay tuned for the rest of the story next week. Get outside and have an adventure!
piz : )
Posted by piz : ) at 12:25 PM

piz : )
I am a high school science teacher and rock climber. I met and married Jane, the love of my life and now have two beautiful sons. I love to rock climb and am very fortunate to have the best sponsors in the business: Arcteryx, SCARPA Shoes, Sterling Ropes,WindXtreme and CAMP-USA equipment. Favorite websites: www.camp-usa.com, www.arcteryx.com, www.scarpa.com, www.sterlingrope.com, www.golightgofast.com www.windx-treme.com